So, here I am, having dragged myself to the sofa to make a blog post!  It's been a bit full on over the last fortnight and I could well understand some of the squads of people who signed up to follow recently wondering if it was worth their while, but I've just had a new boiler and water heating system and a very nasty cold that seems to be making people really quite ill.  Anyway, I was amazed and delighted to see my wired needlelace stumpwork elements tutorial featured in five or six different places and as many people signed up to follow through Blogger in one week as had done in the previous 3+ months!  Welcome to all of you and thank you very much for subscribing.  That goes for those reading through Google Reader, Bloglines and other feeds etc as well.  =)

I finally got my little stitch samples done for TAST weeks 3 and 4 - just in time for the release of weeks 5's stitch tonight!!  As you can see, it's only a few samples on Aida for the time being, as had I planned on doing a piece using all five of January's stitches over the next week or two.  I might still do some, it depends how the inspiration comes and goes and what else there is going on in life!!

Underneath we can see six variations on cretan stitch.  The first two are just basic cretan stitch, the second being on a wider scale than the first.  The third sample is cretan stitch at an angle and the last on that row is Scottish cretan stitch, where one works three stitches fairly close together, then threads the needle around the back of the stitches and then move onto the next one.  On the bottom row you can see a rather wonky open cretan stitch leaf (the limitations of Aida again) and then some cretan stitch filling, which looks rather odd here as you work the blocks diagonally and I was using up the odds and ends of thread from the other samples.  It's quite hard to work as the vertical threads are only anchored top and bottom, so it's easy to warp the whole thing out of shape.

I also finished the cute little cat in a basket cross stitch UFO.  It just wants mounting into a card now and that's that one done. 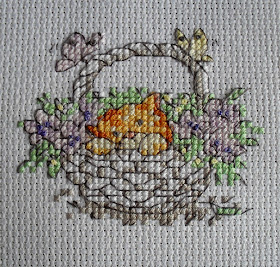 And I started a cross stitched bookmark, which I hope to get finished and handed over this week.  Here's the start of it anyway.

I've been giving some thought to what I'd like to accomplish stitch-wise over the months to come and here are a few of things you can look forward (all being well!!) to seeing on Sew in Love in the near future: 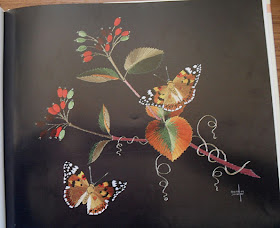 Helen M Stevens' lovely Painted Ladies design from her 'Masterclass Butterflies' book.  This will be made into a cushion/pillow cover for friends.  I'll be working it on black, as shown here from the book and making the edging in a gold ribbon.

I plan to take my first steps in Brazilian embroidery with this kit.  I've already transferred the design onto a piece of white fabric which better suits the thread colours.  I plan to put this into one of those pre-made oval frames as a promised gift for a sweet Japanese lady who put up with us put us up whilst we were in Oxford last month. 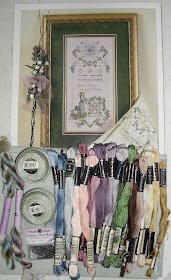 This is something that's been sitting kitted up since we were still in Taiwan!  I put it together more than 18 months ago, and I plan to get it going soon too.  It's to be the green version and will be for my mum.  I might make it into a cushion cover for her, but I'll decide on that later - when there finally is something to finish up!=)

And yes, there'll be some stumpwork coming up (even if I didn't like it that much, it would be a shame to disappoint all you lovely new subscribers who came here for the stumpwork content!)


I want to work this achingly cute little bunny as a small gift for a couple who've had a lot of stress of late whilst he's been in and out of hospital with health troubles.  They've finally found out what was wrong, it's been treated and he's now in convalescence, but something to make them smile won't come amiss, I'm sure.  Besides, it's just SO cute, I want an excuse to work it!!  FYI, it's from the Country Bumpkin 'A-Z of Stumpwork' and, whilst I'm on the subject of that book, don't miss the Stiches and Whimsies blog as she's in the process of working the 'Nature's Diner' piece from the same book.

Finally (for now!) the last two of the five DMC stumpwork kits I had.  When these are all done, the four that will be available (one went in a card a few years ago) will be mounted on cardboard squares and put in a display in our dining area where we have a very blank wall.  The butterfly wings will give me a chance to do a tutorial on wired fabric elements for stumpwork (as opposed to needlelace ones), so look out for that.

I've also started thinking about some very large projects for later on, such as a stumpwork knot garden, some sort of embroidered house and also a 'doll' done as ancient Israel's High Priest.  First though, I have plenty to keep me busy with the above, plus making up the needlepainted dogroses into the finished item and also the needlepoint giraffe I finished up a while ago is all set ready to be sewn up into a scatter cushion/pillow for a disabled lady.

Thanks for your visit. I love to read your comments! ♡
Moderation enabled owing to spam (which is always deleted). :(
July 2022