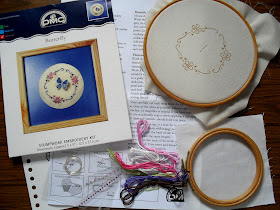 Following hot on the heels of the last stumpwork finish, here's my new project.  I'm now on the penultimate DMC stumpwork kit (all now long discontinued) and, after this, I just have one more - the dragonfly - to work.  Then I can mount them all (except the ladybird, which is in one of Sir's anniversary cards) on small squares and make a display of them on the dining room wall, and woe betide anyone who goes and starts 'playing' with the wired elements!!!=)

Anyway, these shown above were the contents of the kit - instructions, fabrics - one printed, one plain for the wired wings, threads, needles and wire.  Two things were missing - there's actually no blue thread for the butterfly wings and they also didn't put the needed beads in!  Too late to do anything about it now as I'd had the kit several years, it's discontinued and was a gift anyway.  So, I just raided my stash for the missing items. 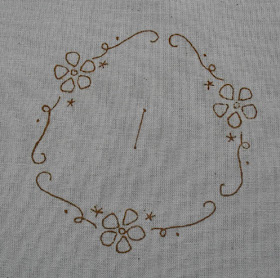 This is the printed outline as supplied in the kit.  Nothing spectacular either way, but the lines are a little thicker than it's helpful to have them considering that some are supposed to be covered by stem stitch worked in two strands of regular cotton.  This is one of the reasons why I really don't mind those kits that expect you to transfer the design for yourself as you can at least use a finer marker so as not to have lines showing!  If I ever do get to making kits myself, then I really can't see my being able to afford screen printing as a beginning one-man band, so they'll have to be user transfer designs... 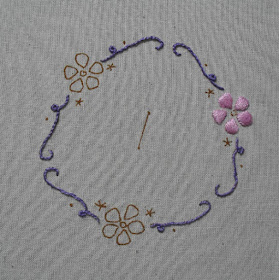 This is the first day's worth of stitching with the lines covered passably well.=) 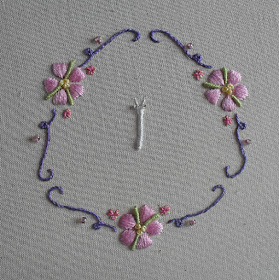 And here we have the surface work all completed.  I used some pretty pinky-purple Mill Hill beads for the six in the garden area, two silvery petite beads for the butterfly eyes and decided against beads for the flower centres and chose to use a couple of lovely yellow Kreiniks blended together (I've been longing to use some genuine yellow - as opposed to gold - metallic threads for a while!) and put three French knots in the centre of each flower.  The butterfly body was supposed to be straight and a little more tapered towards the bottom then it turned out here, but I'm not sure that I don't prefer the slight angle as it makes it a little more realistic looking. 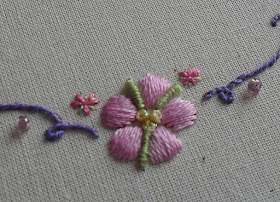 So, there are just the four wings to make and attach now and I'll be making sure to do those in good light so as to get some decent photos for the long-awaited partner to the popular 'Wired Needlelace Elements for Stumpwork' tutorial - a 'Wired Fabric Elements' one.  Look out for that soon!

Thanks for your visit. I love to read your comments! ♡
Moderation enabled owing to spam (which is always deleted). :(
July 2022